The Standard of the President of the Italian Republic 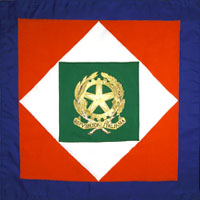 The Standard of the President of the Italian Republic

It was not until 1965 that, at the request of the Ministry of Defence, a project was launched to develop a specific emblem for the Head of State. For reasons of convenience, the authorities discouraged opting for the most natural solution: the tricolour bearing the emblem of the Republic at the centre, which could easily be confused with the insignia of the President of the United Mexican States, which was also Mexico’s national flag.

The resemblance between the Italian flag with the emblem of the State and the Mexican flag.

Among the different options, the then President, Giuseppe Saragat, chose the one with a blue flag charged with the emblem of the Republic in gold. Both these colours belong to the most consolidated Italian military tradition, respectively symbolising command and valour.

Image of the 1965 model of the standard

This model would last until 1990, when President Francesco Cossiga adopted a new standard, consisting of the national flag rimmed in blue. He also introduced a set of rules which multiplied its use and display during official ceremonies and on public buildings.

Image of the 1990 model of the standard

The 1990 model lasted only two years. At the beginning of his term in office, President Oscar Luigi Scalfaro decided to restore the 1965 standard, albeit downsizing the emblem of the Republic. This model was only used until the 4th of November 2000.

Image of the 1992 model of the standard