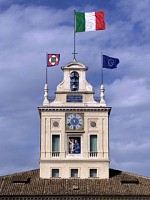 The tricolour became Italy’s national flag in Reggio Emilia on January 7th 1797, when the Cispadane Republic, at the proposal of Deputy Giuseppe Compagnoni, decreed “that the Cispadane Standard or Flag of Three Colours, Green, White and Red shall become universal and that these three Colours also be used in the Cispadane cockade, which must be worn by everybody”. But why precisely these three colours? In the Italy of 1796, which was swept by the victorious Napoleonic army, almost all the numerous Jacobin-inspired republics that had supplanted the old absolute States had adopted flags featuring three bands of equal dimensions and of varying colours, which were clearly inspired by the French model of 1790.

Also the “Italian” military divisions, which were established at the time to support the Napoleonic army, had standards fashioned in the same vogue. More specifically, the regimental banners of the Lombard Legion were coloured white, red and green, three colours that were deeply rooted in the Region’s collective heritage: the white and the red were taken from the age-old municipal coat of arms of the city of Milan (a red cross on a white field) while the green was taken from the uniforms of Milan’s Civic Guards, which had been green as of 1782. The same colours were later adopted for the standards of the Italian Legion, which grouped together the troops of the regions of Emilia and Romagna, which was probably the reason that spurred the Cispadane Republic to confirm them as the colours of its own flag. At the heart of the white fess, the emblem of the Republic, a quiver containing four arrows, surrounded by a garland of laurel decorated with a trophy of arms.

Napoleon’s first campaign in Italy, between 1796 and 1799, disrupted the old system of States into which the peninsula was divided. They were replaced by numerous soundly democratic Jacobin republics: the Ligurian Republic, the Roman Republic, the Neapolitan Republic and the Anconitanian Republic.

Most of these did not survive the Austro-Russian counter-offensive of 1799 while others, after the second campaign in Italy, merged into the Kingdom of Italy, which would last until 1814. Nonetheless they represented the first expression of those ideals of independence that fuelled our Risorgimento. And it was precisely during those years that the flag was no longer perceived as a dynastic or military emblem but as a symbol of the people, of the liberties conquered and thus of the nation.

During the three decades that followed the Congress of Vienna, the tricolour flag was set aside although it continued to be hoisted as an emblem of liberty in the rebellions of 1831, in the Mazzini-inspired revolutions, in the desperate ordeal of the Bandiera brothers, and in the uprisings in the States of the Church.

Everywhere in Italy, the white, red and green tricolour expressed the common hope that fuelled enthusiasms and inspired poets: “Let one flag, one hope gather us all,” wrote Goffredo Mameli in 1847 in his "Il Canto degli Italiani" ("The Song of the Italians"), the Italian national anthem.

And, when 1948 came around bringing with it the need to draft a Constitution, that flag became the symbol of a national revival that swept through Italy, from Milan to Venice, from Rome to Palermo. On 23 March, 1848, King Charles Albert issued the famous edict to the people of the Lombard-Veneto kingdom announcing the first war of independence and that ends with these words: “(…) in order to better show, through external signs, the sentiment of Italian union we want Our Troops (…) the carry the Escutcheon of the House of Savoy upon the Italian tricolour Flag.”

The dynastic emblem was fimbriated azure, in order to avoid the cross and the field of the escutcheon mixing with the white of the flag and the red of the flag’s bands.

From the Unification of Italy to the present

The Kingdom of Italy was proclaimed on 17 March, 1861, and its flag continued to be the one that was customary prior to the war of independence. However, the lack of an ad hoc law on the national flag, which instead only concerned military banners, led to the development of several variants, which were often arbitrary.

It was not until 1925 that the models of the national and State flags were prescribed by law. In the State flag, which was to be used in the residences of the sovereigns, the seats of Parliament, and in institutional offices and diplomatic missions, the coat of arms was defaced with the royal crown.

After the birth of the Republic, a presidential legislative decree of 19 June 1946 provisionally established the new flag, which was later confirmed by the Constituent Assembly in its session of 24 March 1947 and incorporated into Article 12 of the Constitutional Charter. The normally arid wording of the session’s minutes reveals all the emotion of that moment: “PRESIDENT [Ruini] – I put to the vote the new formula proposed by the Commission: The flag of the Republic is the Italian tricolour: green, white and red, in vertical bands of equal dimensions”. (The proposal is approved. The Assembly and the public in the gallery rise to their feet. A loud, prolonged applause echoed in unison).