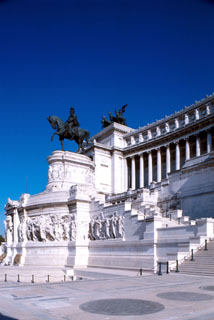 The name was taken after Victor Emmanuel II, the first King of Italy.

At his death, in 1878, it was decided to erect a monument to celebrate the Father of the Homeland and with him the whole Risorgimento.

The Vittoriano was designed to be a space open to all the citizens.

The monumental complex was inaugurated by Victor Emmanuel III on the 4th of June 1911, at the climax of the Internatinal Exposition celebrating the 50th anniversary of the Unification of Italy.

The monumental complex is where, underneath the statue of the Goddess Roma, the body of the Unknown Soldier lies at rest, in memory of the many soldiers who died in war and whose names and place of burial is unknown.